From April 15th to 16th, the ASME joint review team appointed by the American Society of Mechanical Engineers conducted an on-site audit of our ASME quality control system and demonstration products. After a rigorous and rigorous review, the Joint Auditor General (AIS) officially announced: “FANGKUAI Boiler Co., Ltd. has passed the on-site audit and recommended ASME to issue: Power Boiler (S) and Pressure Vessel (U) Certificate and Stamp.”

ASME is the abbreviation of "American Society of Mechanical Engineers", which is mainly devoted to the formulation of relevant standards in the machinery industry and has been recognized by most countries in the world. Obtaining ASME certification is the only way for FANGKUAI Boiler, pressure vessels and other products to enter the international market. Obtaining ASME certification and stamping means obtaining a “passport” for the export of products to the international market. 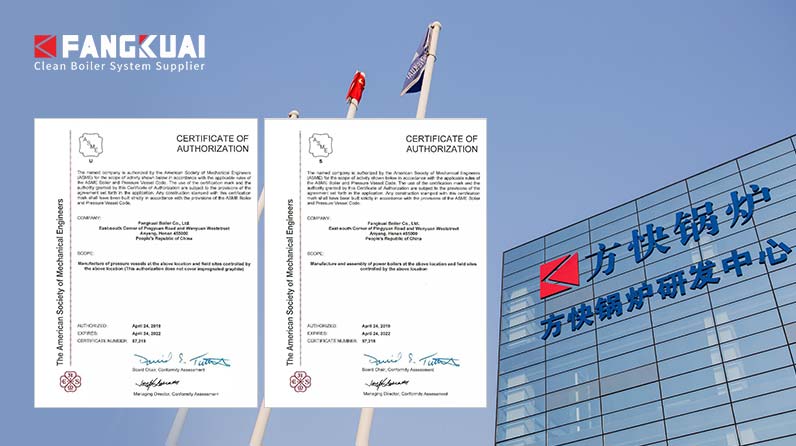 The Group's quality system, technical department, production system, research and development system and other departments, with the assistance of experts, overcame many difficulties, worked overtime, and completed various preparations on schedule. Participants often give up their personal rest time, go to work for ASME study and training, and the frontline staff work overtime to carry out practical exercises. Under the guidance of the core values of the company's “professionalism and lean work”, all the participants in the company continued their efforts to close all kinds of problems raised by the joint review team and passed the ASME certification work at one time.

According to the ASME certification process, after the on-site audit, our company will obtain the certificate and stamp printed within 20 working days, which will be another "milestone" significance in the development history of our company.

We provide installation services for you.

DO YOU HAVE QUESTIONS? WE ARE HERE TO HELP YOU!